Link to this page

Jacques-Joseph Tissot was born in 1836, in Nantes in a seaport on the French coast. Throughout his life Tissot retained an affinity and fascination with all things nautical, and his marked ability to accurately paint rigging and shipboard scene paintings must have come from his boyhood. Tissot was the son of a very prosperous, successful shopkeeper, who was a devout Roman Catholic. Unsurprisingly the young Tissot was sent away to a boarding school run by Jesuits. Tissot senior seems to have been unenthusiastic about the prospect of his son becoming an artist, but eventually accepted the inevitability of his son's artistic pretensions forming the basis of his career.

In 1856 Tissot went to Paris to train as a painter. Here, at the Ecole des Beaux Arts the young Tissot met the young James McNiell Whistler (1834-1903), one of the most celebrated and unusual figures in 19th century art. At about this time Tissot also met, and became a friend of Degas (1834-1917) the Impressionist painter. Like Alma-Tadema, and Edward Burne-Jones, Tissot changed his name at this time to draw attention to himself. In his case he anglicised his Christian name to James. Tissot had fully inherited the shrewd commercial instincts of his father, and again like Alma-Tadema and Millais was a painter-entrepreneur. In the 1860s the painter became something of a traveller, visiting Italy, and in 1862 London. In 1864 Tissot exhibited his oil paintings at the Royal Academy for the first time, suggesting that he realised the potential of London as a source of wealthy patrons. Tissot began to concentrate on contemporary scene paintings at this time. In 1869 he produced caricatures for Vanity Fair magazine, where "Spy" had been the celebrated producer of this type of work for many years. Tissot produced a brilliant caricature of the elegant, sophisticated Frederic Leighton at an evening reception. 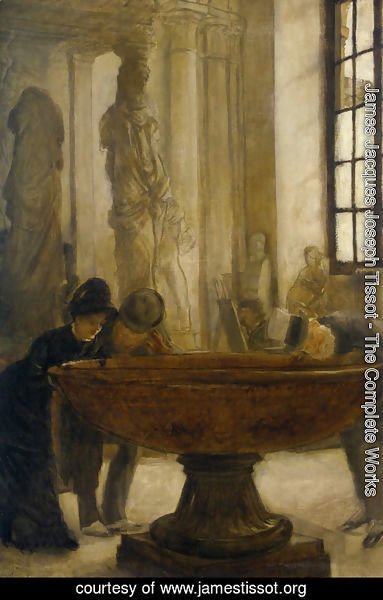 In 1870 the Franco-Prussian war broke out. Following the defeat of France, and the occupation of Paris, Tissot originally lingered in the capital. In 1871, however, Tissot fled to England where he had a considerable number of contacts. Tissot was initially the guest of the Editor of Vanity Fair, with whom he had become friendly, and who seems to have opened doors for him both socially and professionally. Tissot, hard working and shrewd, quickly became successful in London, where his oil paintings of social events and his conversation pieces rapidly became popular. These paintings look beautifully painted, and an interesting record of social life at the time, but were controversial. This was the time when commercially successful people were overtaking the landed aristocracy in wealth, and, as patrons of the arts. This situation was not to the liking of everybody, and in some quarters Tissot paintings were regarded as depictions of the nouveau-riche. Ruskin was a particularly severe critic, describing the Tissot paintings as "mere painted photographs of vulgar society." In 1873, the painter bought the house in St John's Wood where he was to live for the rest of his time in London, and he himself started to become a significant figure socially. Tissot's success in London was regarded with envy by Degas and other painters of his circle in Paris.

In the mid 1870s Tissot met Kathleen Newton (1854-1882), an Irish divorcee with a distinctly colourful past. She had formed a sexual relationship with a man on a voyage to India to be married, and borne his child. Kathleen became his model, muse, mistress, and the great love of his life. Tissot's paintings of his lady tell any observer of sensitivity of his love for her. Many other successful men kept mistresses in St John's Wood, but they did not, like Tissot, live openly with them in adulterous relationships. This situation forced the painter to chose between his social life and Kathleen. To his credit he chose his lady. It would be wrong to think that Tissot became something of a hermit, as he and Kathleen Newton entertained their more bohemian artistic friends at home. But Tissot's days as a man-about-town were over, and he and Kathleen seem to have settled into a quiet life of domesticity. Kathleen's two children lived close by with her sister. Kathleen Newton was an extremely attractive young woman, and appeared in many of Tissot paintings at this time. In the late 1870s her health started to decline, with the onset of that great 19th century killer Tuberculosis. Tissot remained devoted to her. It is likely that the Roman Catholicism of both paintings would not allow them to contemplate marriage. In 1882, the desperately ill Kathleen cheated consumption by committing suicide, and, as a result was not able to be buried in consecrated ground. With one week Tissot left his home at St Johns Wood, and never returned to it. The house was later bought by Alma-Tadema. 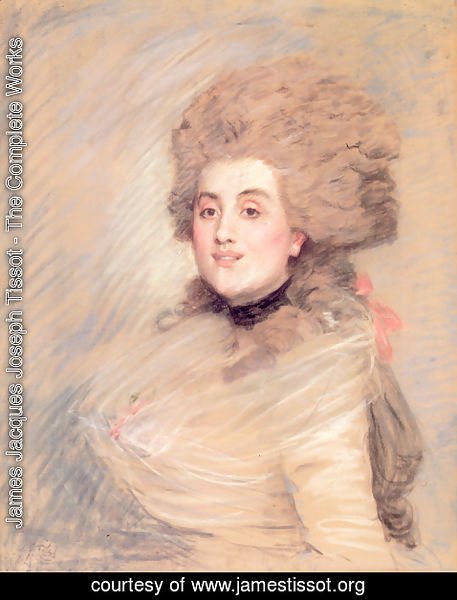 Tissot was devastated by his loss, and never really recovered from it. Tissot seemed unable to accept the enormity and permanence of it. It is rumoured that he considered marriage to other women later in life, but these affairs came to nothing. Like many English people at this time Tissot became interested in Spiritualism, and on a number of occasions tried to contact the dead Kathleen. The exotic French artist and his fallen women-one of the great 19th century English love stories. Initially Tissot carried on working back in Paris, in much the same manner as in London. Tissot produced a series of paintings of attractive, beautifully dressed women in sumptuous surroundings. These paintings were, for a time, extremely fashionable. Following this Tissot experienced a profound religious experience, and became increasingly devout. Tissot embarked on a series of religious paintings, visiting the Middle East on a number of occasions, to observe and paint backgrounds for his oil paintings. These paintings were well-received at the time, but in our more secular age have little appeal. James Tissot at Buillon died on Friday 8th August 1902. (From World Classic Gallery)

Report an error on this page